A Plus One for Murder by Laura Bradford : Book Review 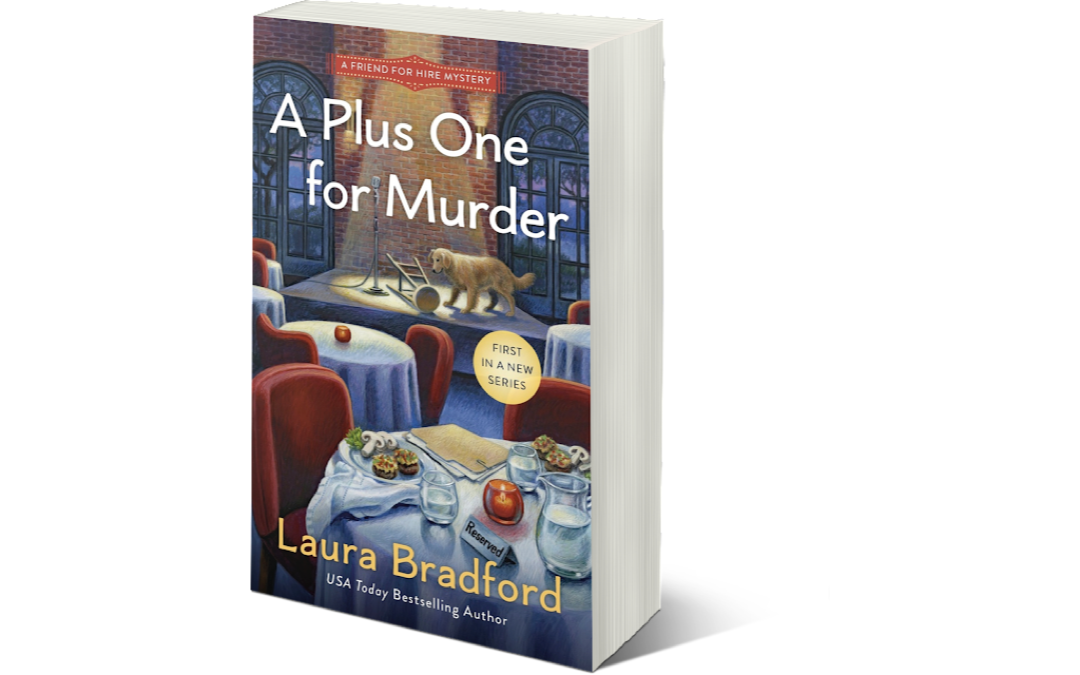 “Emma Westlake has always wanted to be in business for herself. As a kid, she had her own successful lemonade stand and dog-walking business. And when she entered adulthood, Emma sunk all her cash into her dream job of travel planning. But as her customers became more and more internet savvy, the need for her services declined. At a loss for what to do next, she turns to an elderly friend who suggests she try to get paid for doing something she’s really good at–being a paid companion. Emma thinks it’s a crazy idea until requests start pouring in. Big Max from down the block wants her to act as his wingman at the local senior center’s upcoming dance, nurse practitioner Stephanie needs a workout partner, and writer Brian Hill asks Emma to be his cheering section at an open mic night.

Brian will be reading from his latest work and wants to know someone will clap for him when he’s done. When Emma balks at the notion that people wouldn’t, he tells her the room will be filled with people he’s invited–most of whom will likely want him dead by the time he’s done reading. Assuming he’s joking, she laughs. But when Brian steps up to the mic and clears his throat to speak, he promptly drops dead. Emma is one of the last people to see him alive, and so she becomes an immediate suspect. Now she’ll have to cozy up to a killer to save her skin and her new business.” – Amazon

A Plus One for Murder by Laura Bradford is the first cozy in A Friend for Hire Mystery and it was a blast and different than so many other cozies because the main character actually thinks the police should handle the investigating. But her two clients who turn into friends convince her otherwise.

The dynamic between the three sleuths is fantastic, and Bradford even had one of the characters comment on it which gave us a bit of a four wall feel, which just added to my amusement.

We get a main character, Emma and her dog, Scout (the best dog in the world and whom Emma loves so much!), which is a fairly typical main character who is going through a life change and finds herself wrapped up in a murder mystery. I think the Friend for Hire (not an escort!) angle that Brandford came up with is fantastic because we will continually meet new people throughout the series and I can even see Emma traveling to other states/countries, depending on what the person hiring her would want.

There is also Dottie, the 80 year old wealthy woman, Dottie, who is fearless and Stephanie, a self-proclaimed True Crime addict and a middle aged woman whom I feel many readers can relate to… always very busy and when she does have down time she has no motivation to do anything.

Can you tell I was blown away by the characters?!?

The reader also gets a well written mystery with some red herrings and clues that can have you guessing the killer before the three friends… if you pay attention. And lastly, a possible love interest, whom I am looking forward to knowing more about… along with his wonderful father.

Already have book two in the Friend for Hire Mysteries, A Perilous Pal, on my TBR pile and am excited for July 2022, when it comes out!