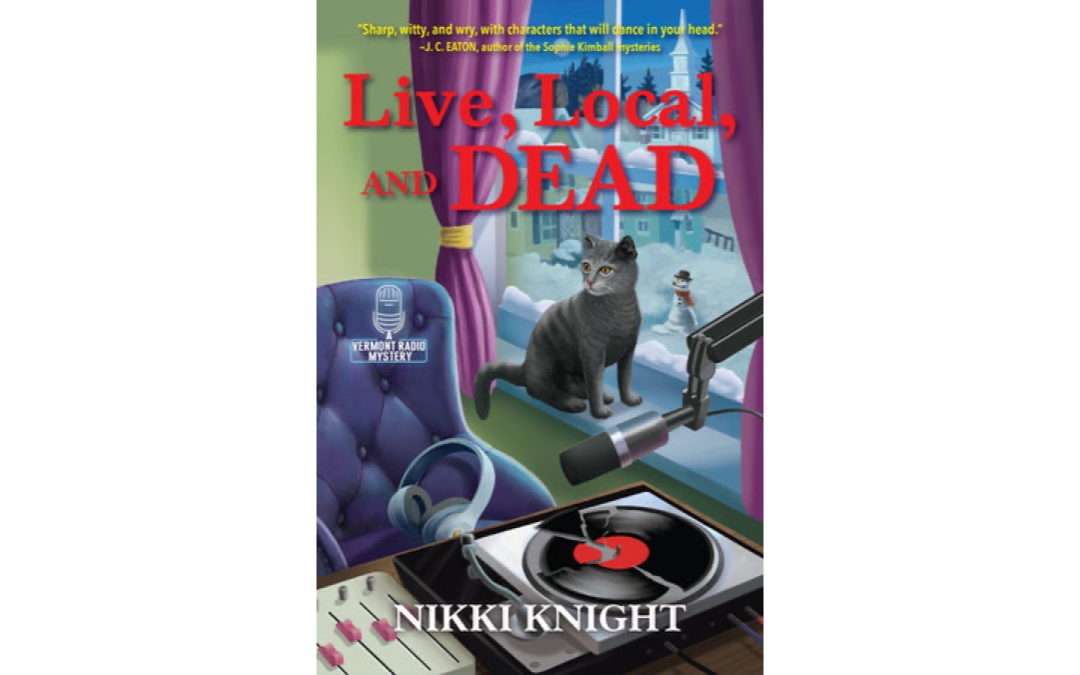 “In a fit of anger, radio DJ Jaye Jordan blows a snowman’s head off with a Revolutionary War-style musket. But the corpse that tumbles out is all too human. Jaye thought life would be quieter when she left New York City and bought a tiny Vermont radio station. But now, Edwin Anger—the ranting and raving radio talk show host who Jaye recently fired—lies dead in the snow. And the Edwin Anger fans who protested his dismissal are sure she killed him.

To clear her name, Jaye must find the real killer, as if she doesn’t have her hands full running the radio station, DJing her all-request love song show, and shuttling tween daughter Ryan to and from school. It doesn’t make matters easier that the governor—Jaye’s old crush—arrived on the scene before the musket smoke cleared. Fortunately, Jaye has allies…if you count the flatulent moose that lives in the transmitter shack, and Neptune, the giant gray cat that lives at the station.

If Jaye can turn the tables on the devious killer, she and the governor may get to make some sweet, sweet music together. But if she can’t, she’ll be off the air…permanently.” – Amazon

Before I get into the review I do want to mention that I think the publisher may want to rethink putting Live, Local, and Dead into the cozy mystery genre. While there are aspects to it that fit (small community and a mystery) I think of it more as a light romantic suspense. I can see die-hard cozy fans being disappointed in it and giving it less stars or a bad review because of this.

Now that said, I really enjoyed Nikki Knight’s (aka Kathleen Kalb) first book in the Vermont Radio Mysteries. The characters and small town caring community really shines and we get a dose of politicians and right wing media that I often try to avoid, but Knight was able to write about these topics in a bit of a lighter way while still showing how they can affect people. If your political views lean heavily to the right, I could see how this book may not be one that you enjoy.

As another reviewer mentioned, these characters do seem to be the best versions of their imperfect selves and the bad guys do seem almost cartoonish in how evil they are, but for me this fictional view of the characters was what added to the story and helped me to be able to digest the politics.

There is a lot of flirting and romance in the story, and while we don’t get to read what’s happening behind bedroom doors (or in the DJ studio) it is pretty obvious. This is another area where I can see old-fashioned cozy readers taking issue with Live, Local, and Dead, but since I read erotica too, I thought it added a fun layer to the book.

I am looking forward to Knight’s next book in the series and catching up with Jaye and the rest of the wonderful and diverse characters, and learning more about Jewish customs.